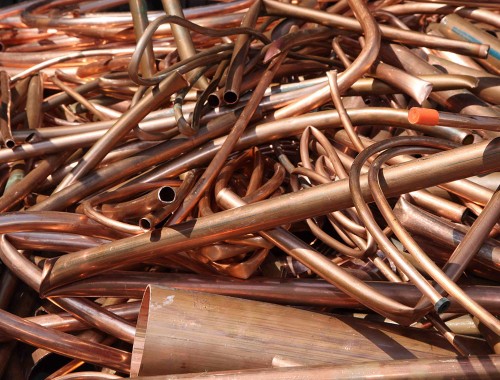 Copper is perhaps one of the most popular metals in the industry due to its characteristics and therefore one of the most valued when reclaiming and selling scrap metal.

Currently, it is the most used material in the manufacture of electrical cables, both for domestic and industrial use. It is also present in many electrical equipment such as generators, motors and transformers. Most telephone cables and telecommunication networks are made of copper.

Copper is also used in the manufacture of some components in the automotive industry such as radiators, brakes, bearings, electric motors, and so on. Railway overhead lines are mainly made up of copper.

Copper is essential in water infrastructure and transport networks, since the pipes are essentially made of copper thanks to its resistance to corrosion and bacteria.

Finally, copper has also been widely used in architecture and construction; both in structural and ornamental elements such as linings, façades, doors, windows, doorknobs, statues, bells and so forth.

Official listing of metals in the London Stock Exchange

We use cookies on our website to give you the most relevant experience by remembering your preferences and repeat visits.

By clicking “Accept”, you consent to the use of ALL the cookies.


You can find out more about which cookies we are using and deactivate them by entering the settings.

This website uses cookies so that we can offer you the best possible user experience. Cookie information is stored in your browser and performs functions such as recognizing you when you return to our website or helping our team to understand which sections of the website you find most interesting and useful.
Necessary cookies Always Enabled
Strictly necessary cookies must always be activated so that we can save your cookie settings preferences.
Cookies de terceros
Esta web utiliza Google Analytics para recopilar información anónima tal como el número de visitantes del sitio, o las páginas más populares.
Dejar esta cookie activa nos permite mejorar nuestra web.
SAVE & ACCEPT